One way to measure the development of prosperity in society is to estimate economic activity. The most commonly used measure of the size and the performance of an economy is Gross domestic product (GDP). The GDP is the total value of all of goods and services that have been produced minus the value of the goods and services needed to produce them. In 2018, in the Albanian economy, the GDP at current prices was estimated to ALL 1,635,715 million (EUR 12.8 Billion).

GDP per capita is also an important indicator of economic performance and a useful unit to make comparisons of average living standards and economic wellbeing. GDP divides the country’s gross domestic product by its total population. In 2018, GDP per capita amounted to ALL 571 thousand (or EUR 4,473).

The GDP continues to grow

Many economic and social bodies in the public and private sectors need a set of comparable and reliable statistics about the economy in order to be able to develop different policies that are based on facts. The change of GDP over time is the most important indicator of economic growth and development. In 2018 the GDP growth rate was 4.07 %, which is high in comparison to 2013 when the GDP growth was 1%.

The more people work and earn money, the higher the demand is for goods and services from the households. As a result, companies increase their production and the household consumption increases. This means that GDP also increases. When times get worse and people get less money to spend, the demand for goods and services decreases. Then companies have to adapt to it and produce less. As a result, GDP grows more slowly or decreases.

In the years of 1997 and 1998 the economy decreased rapidly, but just after it took a big leap. In the first year of the 2000’s the GDP growth rate was around 5% per year. However, in 2008 a financial crisis spread around the world that also affected the Albanian economy. This was due to decrease in exports and Albanian migrants who had less money to send to their families or spend in Albania. After the financial crisis, the economic growth has been lower than before, with the lowest growth in 2013.

Fig. 3 GDP per capita thousand all

In Albania, agriculture is the most important contributor to the economy with almost 20% of the total. Also, trade, transport; accommodation and food services activities with a weight in structure by 16.40 % followed by public administration, education, human health that has also a big impact with 11.50 % in the total economy.

Fig. 4 Structure of branches of economy to GDP 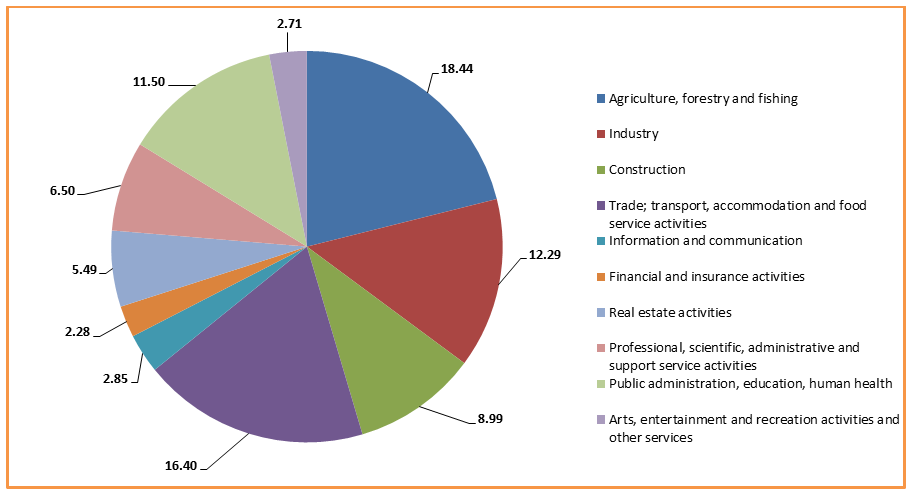